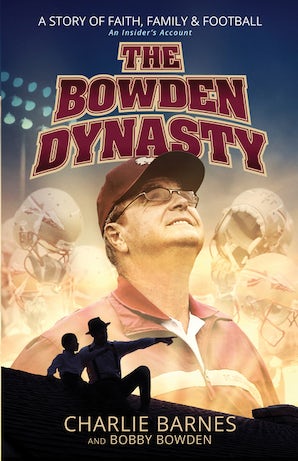 A Story of Faith, Family & Football An Insider’s Account

About 'The Bowden Dynasty'

It stands as one of the greatest achievements in all sports history. From 1987 to 2000 the Florida State Seminoles won the hearts of America and thrilled their fans with 14 consecutive ten-win, top-five seasons. In seven of those seasons they lost only one game. More often than not, the players' quest for a perfect season came down to one play where mere inches or seconds determined the outcome. What were the seeds of this Dynasty? It all began with one man, Bobby Bowden.

Author Charlie Barnes served as executive director and senior vice president of Seminole Boosters until his retirement in 2012. He and Coach Bowden traveled together on the annual Seminole Booster banquet-and-golf circuit (The Bobby Bowden Tour), for more than thirty years. Charlie Barnes was also the voice of the boosters, and his articles appeared in the Report to Boosters, Unconquered Magazine, the Florida State Times, the Overtime Times, the Talla­hassee Democrat, and the Scalping Knife. This special collection of essays spotlight the extraordinary strength of Coach Bobby Bowden's leadership and character, providing entertain­ing insight into the national landscape surrounding Florida State football in the 14-year dynasty era.

Coach Bobby Bowden and his son Steve teamed together to provide Bobby's insights on each of the 14 years of the "Dynasty". This book is a companion to the 2017 feature documentary film The Bowden Dynasty.


"There is no one that has had as much success with as much class as Bowden"
- Nick Saban, Coach

"Bobby Bowden is the greatest coach I've ever been around"
- Lou Holtz, Coach

"Bowden saw Florida State for what it could be – and then made it happen"
- Lee Corso, ESPN Commentator

"He had his priorities straight: faith, family and football – in that order"
- Derrick Brooks, FSU Player